HSA Nominations to the Academy of Social Sciences (AcSS)

The Academy of Social Sciences is the national academy of academics, learned societies and practitioners in the social sciences. Its mission is to promote social science in the United Kingdom for the public benefit.

The Academy is composed of around 1100 individual Fellows, 42 Learned Societies, and a number of affiliates, together representing nearly 90,000 social scientists. Fellows are distinguished scholars and practitioners from academia and the public and private sectors. Most Learned Societies in the social sciences in the UK are represented within the Academy.

Twice a year usually around June and December, the Association is permitted to nominate up to 5 people to become Fellows of the Academy of Social Science (Max 10 per annum). "Nominees must be people of established status and reputation. Nominees must have made a substantial contribution to wider social science – to policy or practice – going beyond the normal requirements of their position."

The criteria and guidelines can be found on the Academy's website. The selection process is highly competitive and involves a rigorous nomination process. To make an application for nomination please complete sections 1, 3, and 4 of The Nomination Form and return it to Prof. Phil Brown [email protected] by email, no later than 4pm on 6th November 2020.

To complete the nomination procedure a CV of the individual must be included, along with the attached Diversity Monitoring Form. The proposer and the nominee cannot be based at the same institution and both should be established current members of the Housing Studies Association (min 5 years membership). Applications will be considered by the Executive Committee of the HSA and nominees will be notified if their application is to be taken forward.

If accepted as a Fellow, individuals will be responsible for payment of the AcSS fellow registration fee, which currently ranges from £97.50 to £225 depending on status and payment method. 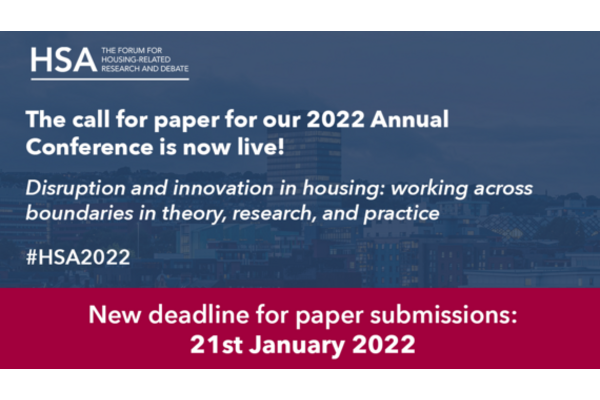 The call for papers for our 2022 Annual Conference has been extended! 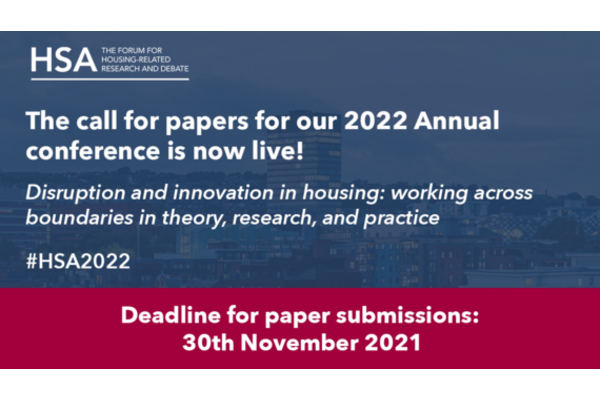 Call for papers for the HSA 2022 Conference is now open!

7 Dec 2020
The Housing Studies Association (HSA) is a limited company registered in England and Wales under company number 13958843 at 42 Wellington Road, Greenfield, OL3 7AQ.
Log in | Powered by White Fuse