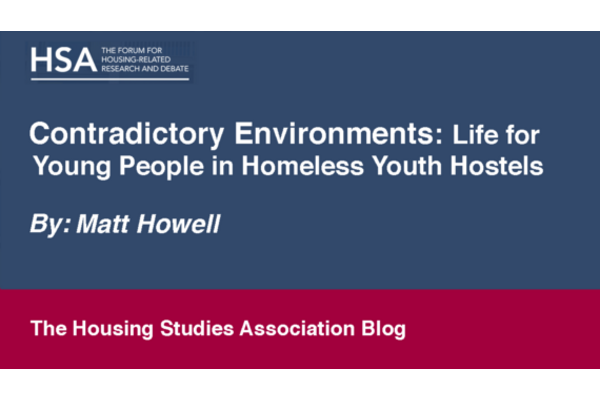 Based on a one-year ethnography in a homeless youth hostel, this blog notes how hostels can bve viewed as contradictory environments for residents.
18 May 2022

Becky: C block, that was the block I lived in the other hostel.

Becky: Yeah, they had blocks in there: A block, B block, C block…

Becky: Yeah, it literally is like jail. It is like jail and that innit? [She looks around at the other young people].,

Becky: You walk in and there is a massive hall…

(Extract taken from a Focus Group at a homeless youth hostel in 2018).

Homeless youth hostels are designed to provide temporary accommodation to young people, providing them with the necessary skills for them to live independently. Although they resemble a temporary home, hostels have many characteristics that are associated with total institutions. For example, paid staff members, surveillance, regulated areas, locks on all doors, rules, and recorded information about residents. To some, these characteristics are seen as measures put in place for residents’ safety and protection. Whilst others view them as being oppressive. The following blog uses data taken from a one-year ethnography in a homeless youth hostel, to demonstrate how homeless hostels can be viewed as contradictory environments to the residents that live there.

Holland and Peace (1998) have discussed some of the issues when trying to provide homely residential care. They point out that because of the nature of residential care homes it becomes hard to provide the service users with homely environments. They describe five contrasting characteristics that are either associated with a home or an institution. These are:

When considering these attributes in relation to homeless youth hostels, it can be seen how their implementation could create confusing environments for residents. Depending on which attributes are adopted by the hostel staff, can impact how the young people identify whilst living at the hostel. Although it would be ideal to create a homely environment for residents of hostels, this is not possible due to the type of specialist/professional service that is being provided.

Whilst carrying out participatory observations at the hostel, I could see that some of the young people were less accepting of the hostel rules than others – particularly those from more disadvantaged backgrounds. This had a direct impact on the resident’s daily lives at the hostel. Those who became familiar with the rules and followed them, gained the trust of the staff members. Subsequently, the staff members offered these residents more freedom, focussing their attention on those who did not recognise the rules. Unfortunately, this resulted in some of the young people in the hostel being policed more than others. As it has been mentioned above, this type of regulation, surveillance, and professionalism is often associated with institutional living.

The following extract reveals how targeted intrusions can negatively impact the relations between the staff members and residents, contributing towards a supervisory staff/inmate relationship (see. Goffman, 1961). It is important to point out that this form of surveillance is a practical response to policing the hostel. Due to staff shortages, the hostel workers often had an increased workload, making time a precious commodity. Thus, making it more practical to onlycheck up on the residents that were likely to break rules. The following discussion took place in the hostel staff office:

Seren [resident] said that she hates Andy [staff member] and when he was doing room checks[1], she watched him on the CCTV monitor. She noticed that he only checked her room. This annoyed her and she felt specifically targeted by Andy (Fieldnotes, Monday 23rd July 2018).

Andy was working alone that day, he was trying to complete administrative tasks in the office, whilst attending to the general running of the hostel. Other residents complained about this happening with different staff members, at different times throughout the observations. They told me that they felt this type of direct intrusion infringed on their liberty, whilst violating their personal space.

The Role of Hostels?

The above blog post touches upon an essential area of consideration when providing services to young homeless people. It shows how the lack of staff resources can result in contradictory environments, with some experiencing more regulation than others. These ideas provoke many more questions around the subjectivity of services that are being provided by homeless youth hostels: are hostels an important safety net to catch those when they fall? Or are they instrument of punishment, containment, and deterrence?

[1] Staff members checked the hostel rooms throughout the day to make sure the building was secure and there were no unauthorised visitors.

Matt Howells is a tutor in Criminology at the Department of Criminology, Sociology and Social Policy at the University of Cardiff.