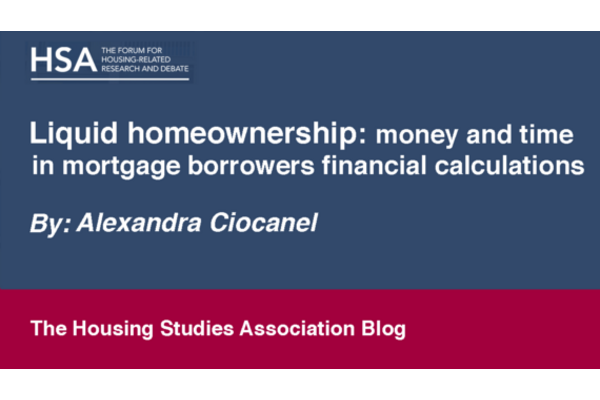 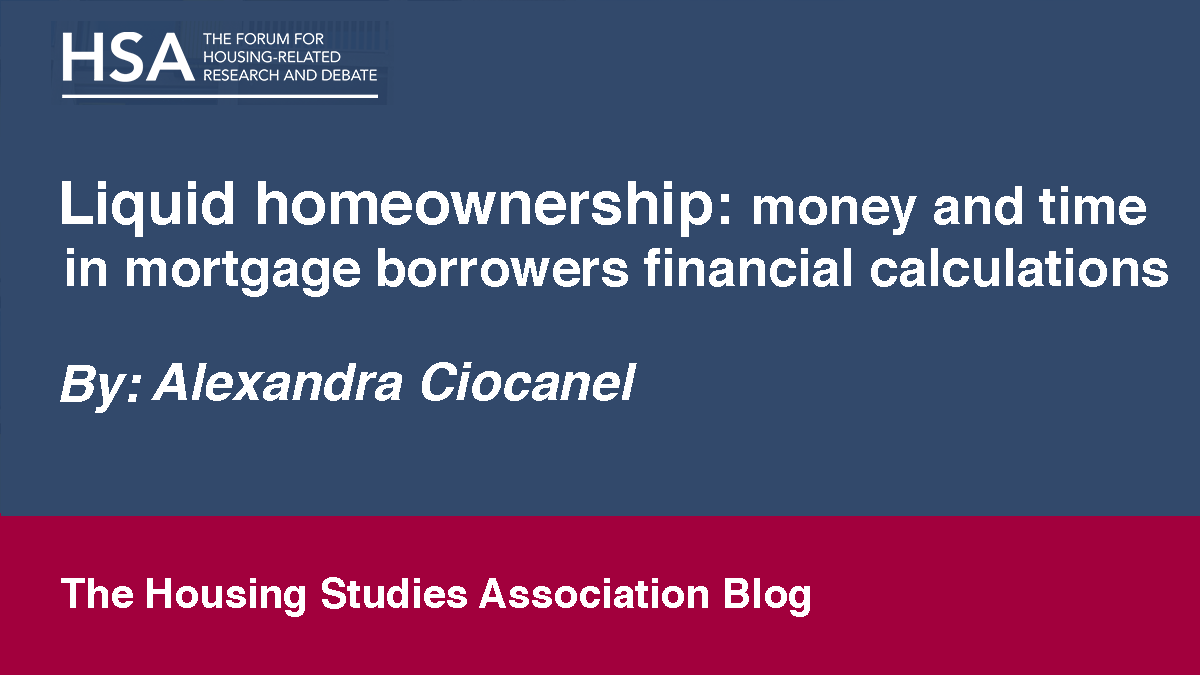 Much has been said about the transformation of housing into assets in Anglo-Saxon countries. Examining households’ perspectives in the UK, Adriana M. Soaita and Beverly A. Searle (2016) show how among their research participants who bought their houses between 1970 and 2012 it was very common to see houses as a “home /asset hybrid”, i.e., mixing emotional, social considerations with the financial when valuing housing. Pointing to how participants overlooked borrowing costs, they coined the term “debt amnesia” to capture British citizens’ miscalculations of their housing costs by reducing them to a difference between current market value and the purchase cost. Soaita and Beverly argue that this is due to the normalisation of debt in the UK, the opacity of mortgages as financial instruments, and the overspread perception that paying a mortgage is cheaper than paying rent. By considering inflation and mortgage costs, the authors show that real gains reflect the UK’s boom-and-bust cycles. By deducting imputed rents, a common consideration in borrowers’ reasoning, they conclude that “homeownership commonly generated an impressive amount of unearned wealth”, although with significant differences when time and space are factored in.

In my PhD research project, I examined a similar phenomenon, the everyday financial calculations around housing and mortgages among middle-class members in Bucharest, through ethnographic research between July 2019 and September 2020, comprising working with mortgage brokers and real estate agents and life history interviews with 40 mortgage homeowners. As the capital of the country with the highest homeownership rate in the world, Bucharest’s housing regime presents essential differences and similarities with major cities in the UK. If the UK’s housing regime can be characterised as “late” and “mature”, being shaped primarily by economic mechanisms such as mortgages, Romania’s housing regime has been considered as “ultra” (Forrest and Hirayama 2018), privatization and marketization measures starting in 1990 being the most important drivers for the rise in homeownership levels from around 70% in 1989 to 96% in 1999. Given the high levels of inflation, unemployment, and more generally uncertain economic stability characterising the 1990s in the country, mortgages as housing loans have been institutionalised only at the end of the 1990s and become a more widespread reality during the 2000s with the privatization of the banking sector. As in other Eastern European countries, mortgages were unproblematically adopted by being associated with a much-desired EU convergence (Pellandini-Simányi and Vargha 2018) and became a much-needed form of house purchase given the escalating housing prices unmatched by similar growth in wages. If during the 1990s, housing prices registered a slow rising trend, between 2002 and 2007 (when Romania was officially recognised as an EU member), the median price of an old apartment rose by a factor of ten, housing prices jumping by approximatively 20% only in 2007. House prices reached a historical peak in 2008 and started to decline after the financial crisis, with prices only recovering from 2015 onwards and continuing since then a rising trend.

A common dilemma among my research participants was “when will the next (real estate) crisis come?”. Expressing concerns about the rising house prices, hoping the future might make housing more accessible, or wanting to be sure that they buy at the “right moment” and not pay overinflated prices. Some argued that the market was already a property bubble, finding no reasonable justification for current prices. In contrast, others thought that this is an effect of the country's economic growth, and was necessary to “catch up with the West”. The trope of “housing as an investment” was overused. Even if housing retained most of its usual emotional and social associations, financial considerations were as important, reflecting a growing link between money and homeownership, or what I call liquid homeownership. This was usually articulated under the form of three powerful sense-making frames: rent as wasted money, housing as an investment, and mortgages as slavery.

Similarly to Soaita and Beverley’s (2016) research participants, mine saw rent payments as “wasted money”, a view that seems extremely widespread in various countries (Samec 2018; Jørgensen 2016; Weiss 2014). Soaita and Beverly treat this as a way through which imputed rent is considered in the homeowners’ financial imaginary and statistically demonstrate that this is a reasonable criterion for evaluating houses as assets. Rather than focusing on the economic adequacy of such everyday calculations, I focused on understanding their social and cultural underpinnings. The pure financial calculations around rent vs. payment were usually accompanied by various musing around why homeownership cannot be seen as a proper tenure for an adult, especially one planning to have a family or already have one. The rental market is highly unregulated in Bucharest without any accountability mechanisms for landlords and tenants. The contrast between rent as wasted money and mortgages as productive investments seemed similar to the difference described by the anthropologist Nancy Munn (1992) in the case of the distinction between eating and kula among the Gawa. Similarly with eating, renting was seen by my participants as a purposeless, present-oriented activity that cannot affect the future. In contrast, mortgage house buying was seen as having productive, spacetime expanding effects in terms of social reproduction. In this sense, many of my participants envisioned a future in which their property might not only be a cash cow for their uncertain retirement incomes, but also could finance their children’s life projects.

In contrast with the UK, in Romania, buy-to-let schemes or equity withdrawal options were practically non-existent. Banks usually promote housing loans with the language and imagery of housing as habitats, a dwelling for everyday living. In 2020, only one bank among the five most popular offered a mortgage specifically targeted to houses as “investment” but with a 65% Loan-to-Value ratio, suggesting its considered a higher risk transaction. However, even if there are not so many top-down approaches of housing as investments, the expression was overused during my fieldwork, and not only for buy to let investments. As one of my participants explained after I asked why she used the term “investment” also for owner-occupied properties:

Maybe investment is not the correct term, but it offers you security, and it may be an investment in your emotional security. It does not produce money, but we can call it an investment, given the peace of mind that it provides.

A common model circulating in the public space to assess residential property as a good investment involves calculating the gross rental yield. However, even if aware of such financial calculations, few of my participants entertain them and were more inclined to think about investment as the difference between purchase costs and projected future market price. Since the property's financial value was mainly imagined as a security net for future plans, making participants less inclined to perform very precise calculations but rather broadly speculate on the future.

If the two previous sense-making frames seem to be widely spread, a theme that distinguishes my participants from the ones described by Soaita and Beverley (2016) relates to seeing mortgages as a form of “slavery”. Rather than a “debt amnesia” as in the UK, the total mortgage costs were an ongoing concern for my participants. All the prospective buyers I observed planned to repay their mortgages in ten years even if they opted initially for twenty/thirty-year contracts and among my interviewees, a third of them had managed to do so. The common terms used for mortgage interest were “high”, “thick-skinned”, “unjustified”, and most participants made comparisons with other Western countries where they thought it much lower. In 2020, the average standard variable rate in Romania was 5.35% and in the UK 4.90% but my interviewees usually referenced the USA, and gave me examples of 1%. When asking one interviewee why he preferred to pay off his mortgage debt in four years rather than the contractual twenty, his initial answer was that he wanted to reduce the interest paid and the risks and uncertainty associated with the variable interest rate, the most common mortgage product in Romania. He also added that:

Credits are the most perverse form of slavery. (…) you practically borrow from your future self. It is like talking with my future self and telling him, “whatever you will do for the next 30 years, I will take out of your incomes this amount, which is a minimum because it can even double. You might be sick, you might want or not to work, if you want to keep this good, you will have to have this amount if not more”. And this binds you.

The theme of mortgages as slavery was frequently voiced, reflecting an understanding of mortgages as “debt bondage” limiting one’s space of action and future possibilities. In this way, paying before term cannot be judged only as a sound or unsound financial decision but must be understood as a way through which borrowers aim to exercise temporal agency by evacuating the long term in a preference for a near future that is easier to control (Guyer 2017).

In conclusion, to properly understand consumers’ financial calculations, it is essential to situate them in their specific social and cultural contexts. In this way, what might appear as miscalculations from an external perspective make sense as a social strategy or as a culturally shaped sensemaking frame that considers the temporalities of social reproduction. Hence, at least in the context of Bucharest, housing has become an asset not only through top-down policies (Adkins, Cooper, and Konings 2020) but also through homebuyers starting to act as “investors despite themselves” (Weiss 2014) through their belief in the liquidity of homeownership and its capacity to provide for various future life projects.

Alexandra Ciocanel is a PhD candidate in Social Anthropology (University of Manchester) and a Research Associate in the project Code encounters algorithmic risk-profiling in housing (University of York). Her doctoral research examines the social underpinnings and consequences of the assetisation of housing with a focus on how future orientations shape present-day housing decisions. Looking at the role of future projections related to a normative organization of the life course and of expectations of return from investment in housing, she proposes the concept of liquid homeownership to capture two important aspects of financialized homeownership: the constant need of cash liquidity in order to meet mortgage repayment and the expectancy of fast capital gains either through renting or selling.

Guyer, Jane. 2017. “Anthropology and the Near-Future Concept.” In Handbook of Anticipation. Theoretical and Applied Aspects of the Use of Future in Decision Making, edited by Roberto Poli, 375–91. Springer International Publishing Cham.