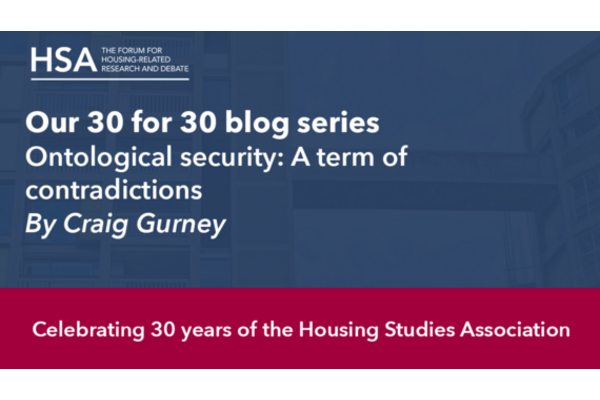 Ontological security. A term of contradictions.

In this blog, written as part of the HSA’s 30 from 30 series of contributions which look back on developments over the last 30 years, I consider ontological security; a concept which first made an appearance in housing studies during the mid 1980s.  One might argue that such longevity is a sign that the concept has become a mainstay of housing theory, housing analysis and the framing of housing policy.

I want to say three things about ontological security.  First that the term has been systematically misused and is now so far away from its original specification as to render an altogether different meaning from that intended.  Second, that there has been a lack of critical reflection about the specification, definition, and operationalization of the concept to the extent that it has become taken for granted.  Third, that the alleged benefits of the ontological security provided by home are largely illusory and have been overstated in the literature.

1 The term has been systematically misused and is now so far away from its original specification as to render an altogether different meaning from that intended.

The concept was first coined by RD Laing.  His book, The Divided Self (1960) includes a collection of his notes about patients with schizophrenia.  He argued that the ontologically insecure patient experienced the three anxieties of implosion, petrification and engulfment.  To be ontologically secure was, in Laing’s words to be “normal”.  Thus;

“The individual ... may experience his (sic) own being as real, alive, whole; as differentiated from the rest of the world in ordinary circumstances so clearly that his identity and autonomy are never in question ... He thus has a firm core of ontological security” (p 41).

“This, however, may not be the case.  The individual ... may feel more unreal than real; in a literal sense, more dead than alive; precariously differentiated from the rest of the world so that his (sic) identity and autonomy are always in question” (p 42).

So according to Laing, to be ontologically secure is to experience a “normal”, stable state.  So how did we get from the idea of ontological insecurity being a symptom of a mental illness which affects roughly one in 100 people to the idea that home can provide a curative source of existential certainty?  It seems nonsensical to advance an argument that the presence of home, in itself, inoculates one against mental illness or that its absence causes mental illness, yet generations of housing researchers have used Laing’s decontextualised term in such a way.  There is a collective and shared culpability here, indeed my own MSc dissertation, written in 1989, entitled In Search of Ontological Security is guilty of reductionism and measurement by fiat in relying heavily on Likert-scale measurements of lists of meanings.

The term was rediscovered by Anthony Giddens in the early 1980s.  For him ontological security was a “confidence or trust that the natural and social worlds are as they appear to be, including the basic existential parameters of self and social identity” (Giddens, 1984 p 375) but it was Peter Saunders who popularised the term amongst housing scholars.  Saunders (1986, 1989, 1990) drew on Giddens to support his argument that owning/renting was a key cleavage in a sociology of consumption whereby home ownership offered the psychological benefits of “niche and belonging” compared to the “alienation from home” felt by tenants.  Those old enough to remember Saunders’ appearances at Housing Studies Association conferences will recall how his well-articulated arguments about a tenure-specific, gender-neutral meaning of home were received (see, for example Gurney 1990, 1997).  Adrian Franklin captured the mood of many at the time by claiming that ontological security was merely “a fantasy of the academic” (1986, p 39).

Since those heady days of stand-up arguments between neo-Weberians and neo-Marxists at housing conferences, ontological security has become further decoupled from tenure-specific and mental illness arguments and has come to denote a constellation of meanings associated with well-being, permanence, safety, routine, control, identity and emotional salience.  The close association between home-ownership and ontological security has been replaced by a narrative which privileges security of tenure and opportunities for home-making.

Notable contributions to the meaning of home literature over the last 30 year (Dupuis and Thorns ,1998, Kearns et al., 2000, Hiscock et al., 2001, Cairney and Boyle, 2004, Padget, 2007, Henwood et al., 2018, Byrne, 2020, Soaita and McKee, 2019, 2021, Rosenberg et al., 2021) have frequently drawn heavily on the binaries of home/homeless and ontological security/insecurity whilst demonstrating a gradual and incremental evolution in the use of the term.  This brings me to my second argument which concerns the consequences of failing to discuss the archaeology and trajectory of ontological security in housing studies.

2 There has been a lack of critical reflection about the specification, definition, and operationalization of the concept to the extent that it has become taken for granted.

It is not unusual for concepts to change their meaning over time.  Consider how we now think about class, for example compared to 30 years ago.  Does this matter?  Possibly not, but what does matter is that a sustained and robust critical engagement with a concept which is at least twice removed from its initial iteration is almost completely absent in housing studies. This stands in stark contrast to debates within International Relations (IR) for example, where a distinctive tradition of ontological security studies has developed in which the concept has been scaled up to account for non-physical threats to nation states.  Whilst housing studies scholars might not feel comfortable in suggesting that ontological security offers a “firewall against chaos” (Mitzen 2006, p 274), we should admire the IR community’s robust and nuanced operationalisation of the termand in particular the conceptual separation of anxiety from fear and normal anxiety from neurotic anxiety (Gustafsson and Krickel-Choi 2020).

With the passage of time and the emergence of new debates driven by new researchers within the field of housing studies it is inevitable that epistemological memory fades.  I am not arguing here that younger scholars should heed their elders but simply point out that 30 years ago the term ontological security was used in a very different way to the way it is used now.  That merits some critical reflection.

Ontological security has always been notoriously difficult to operationalise.  Measurement by fiat fuelled by a reliance upon proxies can be identified in much published work on the subject.  The lack of a convincing and ongoing critique of how the term is operationalised and measured amongst housing researchers increases the risk that one generation’s mistakes are reproduced by the next.  In a spirit of conceptual caution, I would urge circumspection in using ontological security.    Questions to consider might include, for example: How is the term being operationalised?  Do the selected variables demonstrate validity and reliability?  Are you measuring something other than ontological security (place-attachment or memories, for example)?  Does the correlation of indicators really demonstrate causation?  From what other sources might ontological security be derived?  Is ontological security any different to “security” (one of the international keywords which Richards (1990) pointed out is typically associated with the meaning of home and which might stand for the absence of financial, emotional or physical harms).  To what extent is the definition of ontological security sufficiently robust to test in the first place?

Ontological security is a concept which could offer housing researchers many more insights than it does at present.  At the moment, it is more or less synonymous with the summation of the various meanings - or attributes - of home.  Thus, to be home-less, implies an existential as well as material deprivation.  More conceptual work on the meaning of homelessness and “homelessness theory” in general (Somerville 1992; Rosenburg et al 2021) is long overdue.  Moreover, fundamental philosophical questions about the conceptual work which home does (see Meers 2021) in relation to storing and transmitting psycho-social benefits or the material practices which might sustain a sense of home (Soaita and McKee 2019) are vital in order to understand the conceptual utility of ontological security.  Kemeny (1992a, 1992b) famously bemoaned the lack of first order and second order concepts in housing analysis.  Ontological security as currently specified lacks the insights which we might find in Kemeny’s idea of “dwelling” or “residence” but it could do much more to earn it’s keep by justifying its position as a taken for granted mainstay of work on the meaning of home and of housing, health and wellbeing.

3. The alleged benefits of the ontological security provided by home are largely illusory and have been overstated in the literature.

What if ontological security had never been introduced to housing studies?  How would the subject area have developed?  How would our understanding of the meaning of home be different?  Do we expect too much from home?  What if theories of place attachment had been more influential in housing studies?  These are all impossible questions to answer, of course, but they offer some valuable insights and remind us that, at the outset, there was considerable scepticism about whether the term existed beyond the imaginations of academics.

In recent work (Gurney 2020, 2021) I have argued that there is a dark-side of home which has been neglected in the meaning of home literature in favour of a series of relentlessly positive narratives of home or home-making.  The continued conceptualisation of home as a store of ontological security, rather than as a place of “home un-making” (Baxter and Brickell 2014, McCarthy 2020) or the unheimlich (McCarthy 2018), of intimate partner violence, or as a locus for various forms of social harms was highlighted during the stay at home orders associated with the Covid 19 pandemic.  For many, home was revealed as a source of ontological insecurity.  Beyond home, what of other sources of ontological security?  Access to green or blue spaces, to job satisfaction, to social capital, to feelings of love, acceptance and belonging in a relationship or a community seem to offer many of the psycho-social benefits which have often been associated with home as a physical structure.

Conclusion:  What are we to make of ontological security in housing studies 30 years on?

In my view, the term has become taken for granted and has lost its value.  Nevertheless, I believe it still has a cogency for debates in housing studies provided we take collective responsibility for engaging more critically with the concept than has been the case in the recent past.

Three fruitful areas for further development of the concept can be identified.  First, work on the fear of fire in the context of Grenfell Tower and the cladding scandal offers possibilities for uncovering fear and anxiety as everyday lived housing experiences (see, for example Martin and Preece 2021, MHLG 2021).  Second, an application of ontological security theory to the meanings of being home-less may offer new insights into rights-based perspectives on housing.  Third a re-examination of ontological security in the light of a social harm perspective may offer some psycho-social insights into the relationships between home, well-being and health.

There are doubtless many other areas in which ontological security could be usefully developed within housing studies.  I shall look forward with interest to seeing how these developments unfold.

Giddens, A. 1984.  The constitution of society.  Outline of the theory of structuration.  Berkley.  University of California Press.

Gurney, C.M. 1990.  The meaning of home in the decade of owner occupation.  Towards an experiential perspective.  SAUS Working Paper 88.  Bristol.  School for Advanced Urban Studies, University of Bristol.

Laing, R.D., 1960. The Divided Self: an existential study in sanity and madness. London. Penguin.